It was a curious time to be late for a meeting.

Alan Fish, vice chancellor of facilities for University of Wisconsin-Madison, on Wednesday walked into the state Building Commission meeting at the Capitol after the meeting was well under way. Fish and the University of Wisconsin System had a crucial last-minute agreement for more than $100 million in building projects on the table for approval.

It turned out, though, that Fish, who would later testify, wasn’t late. He had been held outside the meeting by Capitol security members, who said the Governor’s Conference Room was over capacity.

Following the meeting, Fish declined to discuss his temporary exclusion from the proceedings. But the Building Commission’s two Democratic members — Sen. Fred Risser, D-Madison, and Rep. Mark Pocan, D-Madison — were happy to fill in the gaps.

“We were here on our way into the meeting, then they stopped people that were with us,” including Fish, Risser said. “The public has a right to attend. They said, no, the place is full. We said, ‘What is capacity?’ They didn’t give us a number. They said it was just full.”

When Risser and Pocan saw that Fish and other members of the public would not be allowed into the Building Commission meeting, the two lawmakers said they boycotted the meeting in protest.

“It’s this kind of arbitrary enforcement of the rules we’ve seen over and over that are in violation of the Open Meetings Law,” Pocan said, “and I’m not going to comply or participate in something that’s a sham government.”

Walker spokesman Cullen Werwie said the meeting was “open to the public,” but declined to speak to the meeting’s capacity and the decision to stop letting people inside. Capitol Police officers stationed outside the Governor’s Conference Room said they did not know why people were held outside or what the room’s capacity was.

Pocan, who earlier in the day had written a critical letter to Republican lawmakers, called on Republicans to reopen full access to meetings and the Capitol building, where members of the public have been waiting in long lines to enter.

“I’m trying to talk to the legislative side — that’s my branch,” Pocan said. “In all my years here, I haven’t been more disheartened with the Democratic process.”

Senate President Michael Ellis, R-Neenah, said he was disappointed that after the Legislature had made progress toward reconciliation on Tuesday, bickering over processes re-emerged on Wednesday.

“We should try to reduce the tension rather than exacerbate it,” Ellis said. “I don’t know what happened. I came in late. I don’t know how many people they can have in that room.

“I don’t really think this helps getting us all back doing the people’s business. This is a sideshow.”

Risser said the move by he and Pocan does not represent a larger decision made by Democrats to boycott meetings, but rather that he and Pocan will react when they think the Democratic process is being violated.

“We will attend meetings that are open to the public,” Risser said, “but we’re not going to attend secret meetings.” 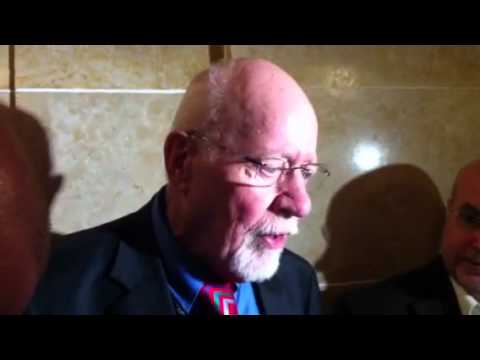